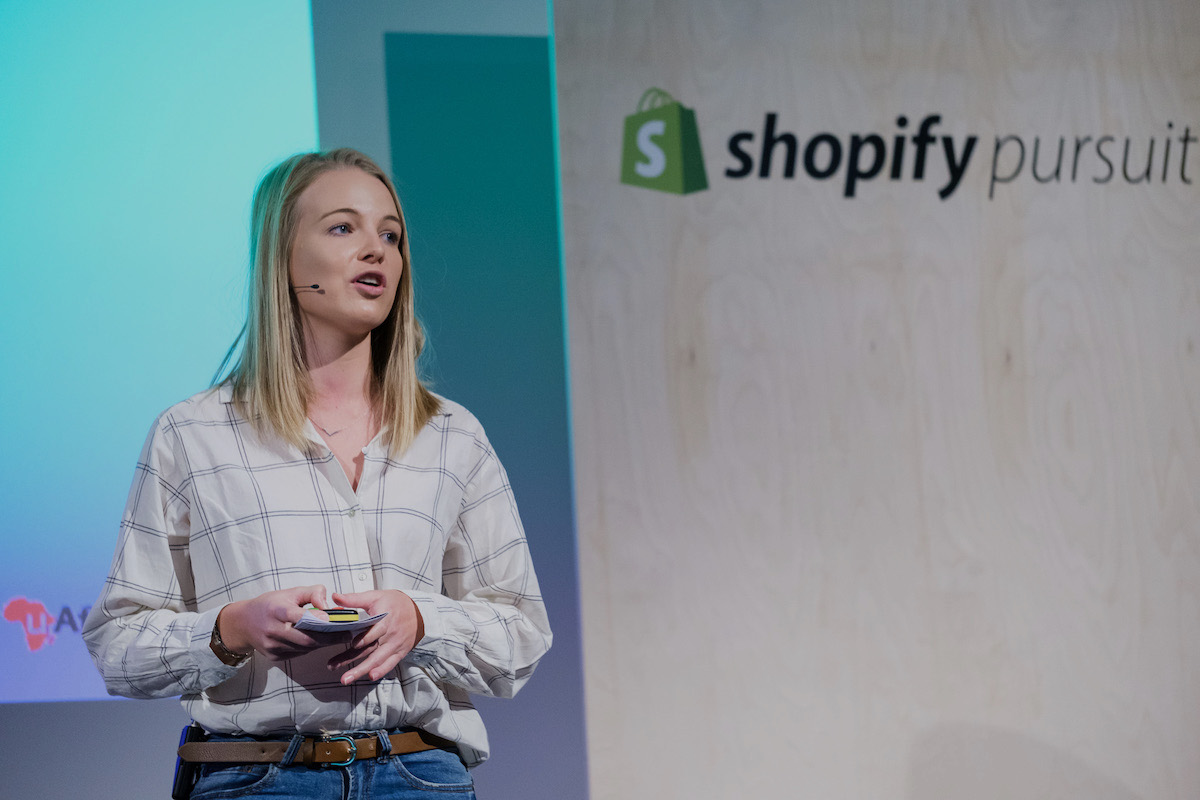 uAfrica was suggested as a keynote speaker for the event in Amsterdam by our former area manager to speak about the great success that we’ve had in the South African eCommerce industry. Once our topic was approved, months of preparation, VISA applications and research followed. It was a great excuse for me to go shopping though!

Shopify Pursuit started a day early for some of the attendees, as we were invited to a pre-event fine dining experience by the team from PushOwl. The dinner was held at a quaint restaurant called “Meneer De Wit Heeft Honger” and the food was absolutely delicious. It was the perfect opportunity to meet some of the sponsors and partners in a more intimate setting before the big conference.

Pursuit Day 1 was filled with Shopify workshops. There was also a large space that had been set-up as a networking space where we could meet other attendees, drink some delicious coffee and get some work done. The Shopify team had also set up “Office Hours”, allowing us to book meetings with some of the Shopify team members, where I also able to meet our new area manager.

A Welcoming Social followed at the Kanarie Club, a fantastic bar/workspace situated in the middle of the vibey De Hallen cultural centre, where the conference was also held. Here we were served Amsterdam’s famous Heineken beer and some tasty snacks. The speakers, sponsors and Shopify team members were then invited to a VIP Dinner at Soho House. This was an unbelievable experience! I had the honour of sitting across from Jean-Michel Lemieux, the CTO of Shopify, who shared the most interesting stories about Canada, the Shopify tech team and sailing.

Pursuit Day 2 had a bright and early start for the conference speakers. Our headsets and presentations had to be tested and we received our final instructions. Then at 10:00 am, the day was kicked off by our MC for the day, Susanne Holmsäter, the Market Development Manager at Shopify.

The opening keynote was then presented by Shopify’s Jean-Michel Lemieux. He spoke about global network infrastructure, sections, internationalisation, new performance dashboards and the latest APIs. He also gave us an inside look at the future of Shopify’s platform and mentioned that the biggest Shopify merchants are doing more than 40 000 orders per minute!

An important heads-up to all Shopify App Developers: “We will be highlighting app and online store performance and ranking in the admin/partners dash/App Store soon”, so take note!

Other Shopify updates include:

Next up were the guys from Ask Phill, Martijn Wijsmuller and Paul Veen. They explained the concept of headless eCommerce and discussed the endless possibilities of implementing such a strategy. They shared these four steps to setting your clients up for success: 1. Setup content management; 2. Connect to Shopify; 3. Make the website multilingual; 4. Deploy. This is definitely a strategy to look into for your own businesses.

The uAfrica talk was the third keynote of the day and the last before a much needed lunch break. I spoke about the history of uAfrica and how we started our partnership with Shopify. I also shared about the current state of eCommerce in South Africa and the very bright future that the eCommerce sector is facing. It was very surprising to hear afterwards how little people know about our country and the potential that lies in it.

After a delicious lunch and a strong cup of coffee, the talks continued – this time, lightning talks! Representatives from Yotpo, Searchanise and Facebook took to the stage to discuss their products and how to grow your business.

The third keynote speaker set the house on fire! Panagora’s Moon-Suck Song presented an amazing talk on branding and finding a voice in the busy marketplace. He effortlessly discussed Yeazys, Netflix, Babyshop, Amazon and dozens of other digital players in one small speech. One of the main takeaways from his talk is to “build hype through low supply” – like exclusive or limited editions, much like they do in the sneaker industry. “Creating that exclusive feel to products can create a huge cult following and a unique experience for the customer”. Another takeaway is to “find a crowd and get in front of them”. Building brand partnerships can help you get in front of people who are interested in your products and allow you to capitalise on that market.

Lastly, there was an intimate firechat with two Shopify Merchants, Klabu and Filling Pieces who took part in a live on-stage interview to share their stories and how they work best within the Shopify Partner network.

The day ended with a much-needed happy hour. It was a day packed with action and information, new partnerships and amazing opportunities. It was an honour to not only represent uAfrica, but also speak at a conference with so many global attendees. A big thank you goes out to Shopify for the opportunity and to the Shopify Pursuit team for guidance and for setting up a truly amazing event. It was life-changing.

Danika Uhlmann is the Marketing Coordinator for uAfrica.com. She has a background in research and public speaking, with an Honours degree in Marketing Management from the University of Pretoria, South Africa.

*All of the photos used in this blog post are supplied by Shopify.

Due to the evolving public health concerns around COVID-19, Shopify made the call to cancel the rest of the Shopify Pursuit conference series, as well as Shopify Unite in 2020.