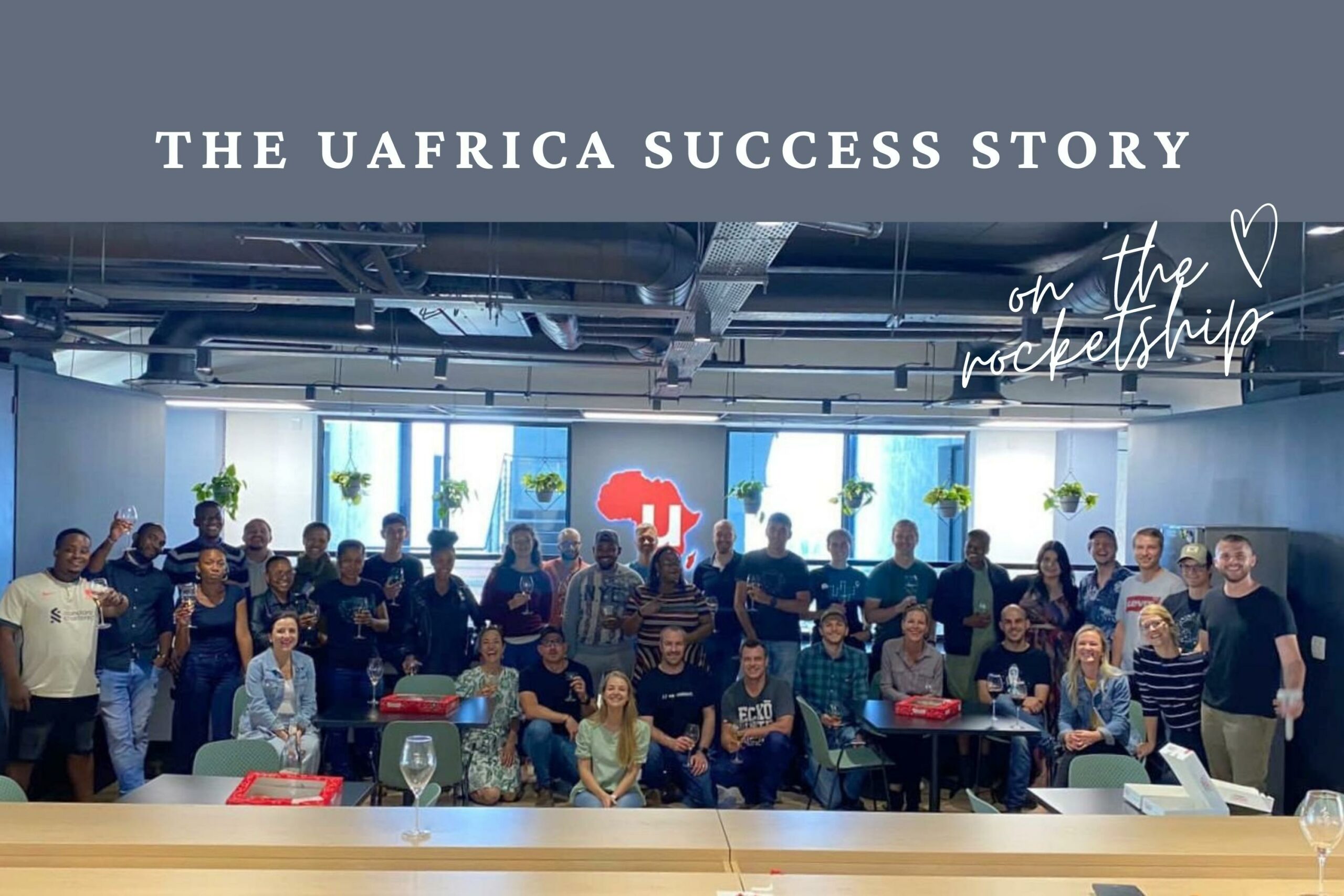 The story of uAfrica started back in 2004 as Jump Shopping, a company founded by Jaco Roux – now uAfrica’s Head of Product and co-founder. Jump Shopping was an online store and was later turned into and better known as an online price comparison engine, jump.co.za. Towards the end of 2005, bidorbuy became a shareholder in Jump. In August 2012, Andy Higgins, founder and former Managing Director of bidorbuy.co.za, joined forces with the Jump Shopping team and together with his passion for the Internet and Jump Shopping’s founder Jaco Roux’s love for development, uAfrica.com was launched.

The original concept of uAfrica put a focus on all aspects of eCommerce and essentially became a holding company with various other subsidiaries. Expanding on the original idea of a price comparison engine, cleverly renamed to uPrice.co.za, uAfrica was also known as an accredited co.za domain name registrar with Uniforum South Africa. The aim was to provide affordable and user-friendly domain name registration and management services through uWeb.co.za. The company also specialised in providing eCommerce Consultancy for all aspects of running an eCommerce business, as well as conducting eCommerce Research and Training. uAfrica also hosted the annual South African eCommerce Awards until 2015; an initiative to recognise and reward companies that demonstrate excellence operating in the eCommerce space within South Africa.

The new uAfrica team then started creating a multichannel solution for people to get products from their online stores to bidorbuy, PriceCheck and Shopify. At the time, there were three middleware solutions where each of these could be “plugged” into separately. It was then that they realised that there were no good cloud-based solutions in South Africa. Although Shopify was just starting out at the time, it was, unfortunately, not available in South Africa because there was no payment gateway yet that integrated with Shopify. The uAfrica team took the plunge and went ahead to develop a plugin for Shopify that enabled PayFast to integrate into Shopify. Although Shopify did not really allow for it at the time, the team got the go-ahead and paid for the integration. This integration allowed uAfrica to sign up Shopify customers in South Africa. As part of this Shopify plugin development, uAfrica requested to become a Shopify Partner, so Andy and Jaco flew over and “courted” Shopify  to be their exclusive partner in South Africa. uAfrica then went on to sign up between 3000 and 4000 online stores in South Africa to Shopify.

After becoming a Shopify partner and building that customer base, the uAfrica team started developing the multichannel app which pulled everything together. The app offered multichannel solutions to allow customers to push products from one channel to another and to keep two channels in sync. It was then that they discovered the big, gaping hole in the South Africa eCommerce industry: fulfilment and shipping. With courier systems being notoriously difficult to integrate with, especially for those running small to medium businesses, uAfrica decided to take the pain out of the process by developing a single, easy to use solution.

This led to the development of uAfrica as we know it today. uAfrica is now known as an eCommerce tool built to streamline order fulfilment and shipping processes. It has two main features – Shipping and Multichannel, and its aim is to automate and smooth out order processes for online stores in South Africa.

The Shipping feature operates as follows: Orders from the various sales channels can be fulfilled from the central dashboard. Merchants can specify their order’s dimensions and specifications and receive various real-time quotes from our three courier partners. After choosing a suitable quote and fulfilling the order, uAfrica does the rest! The system generates an automated shipping label, sends a collection request to the courier to pick up the parcel, enables automated tracking for the parcel, and sends an update to the customer. The only thing left to do is to print the shipping label, pack the parcel and wait for the courier.

The Multichannel solution gives merchants the ability to sell their goods across multiple platforms such as bidorbuy, Shopify, WooCommerce and PriceCheck. uAfrica has built integrations with these platforms, enabling the syncing of orders from the different platforms to uAfrica’s central dashboard. Merchants can manage and fulfil their orders from the dashboard, while inventory is updated and information is sent back to the specific platforms. uAfrica’s Multichannel also enables the pushing of products from the Primary sales channel to other secondary channels.

Throughout this journey, the uAfrica family has grown quite significantly. Two team members moved over from Jump Shopping and after rebranding as uAfrica, the tech team grew to four. At most, the tech team consisted of ten members, which decreased again in size as the product stabilised and developers moved into new roles. As the shipping solutions were built, they realised that a customer support team was needed. That, along with the COVID-19 pandemic in 2020, expanded the size of the team rapidly from 15 in early 2020 to 41 at this point in time.

uAfrica is currently being used by more than two thousand online merchants in South Africa, with four platform integrations (Shopify, WooCommerce, bidorbuy and PriceCheck) and five integrated courier partners (The Courier Guy, CourierIt, Dawn Wing, MDS Collivery and Internet Express). The year on year growth from 2019 to 2020 was absolutely staggering and allowed uAfrica the space to continue expansion on their offerings and shipping features.

And the plan going forward? Onwards and upwards – join us on our rocketship!